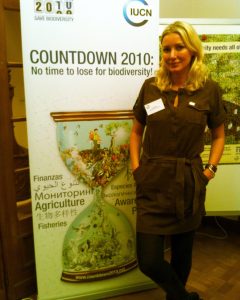 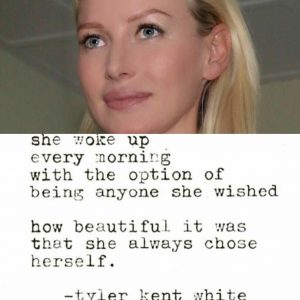 What is the philosophy, the purpose of your association, Global Biodiversity Protection?
“The conservation”, sustainable use and protection of natural resources, including plant, animal, mineral deposits, soil, clean water, unpolluted air, the fossil energy sources, such as coal, oil and natural gas.
Humanity today are not happy in this consumption system completely focused on money. We have to go to another society, another value system.
I do not want a revolution, we are not protesting, I wish to work closely with the states.
This is  mean to re-educate people in “quotes” to wake up they consciences and to go to a better wellness.
I will like that we go to a more realistic population. People must become aware of the importance of protecting nature, to become a more noble civilization, we need to change attitudes. We wish to go in that direction.
I wish to develop more eco-guards for protection of wildlife and flora, fight against poaching. And that Eco tourism is growing everywhere, eco-sustainable architecture also takes its place. The people live in a healthy environment, solar panels are used, the water they drink is healthy, there is an eco-sustainable medicine that heals.
We must do the same for employees, so they can work in healthy conditions, and not to suffer under unhealthy work stress that ultimately leads to serious diseases.
We call them ” Green jobs ”, jobs that meet the person, his health, which puts them in pleasant conditions, etc … and The employees will be more effective. Nobody today in developed countries want work as a ” slave ”.
In Scandinavia, especially in Norway, enterprises are ahead in this field. ”

One of our projects is to establish an orphanage in an eco-sustainable environment in the Democratic Republic of Congo, with a botanical garden, which will be partly funded by a bio-agriculture.
Bio-agriculture will support and finance the orphanage and the botanical garden. We will have a third installment in this project, animal protection with the introduction of some endangered animals, including gorillas. All technologies used in the farm will be eco-sustainable. This project will have a direct impact on the villagers, it is intended to fight against poverty and the consequences of hunger and malnutrition.

I like to have your views on the COP 21 / SIF 15, also a Biodiversity New low, Which has been passed in the Senate banning particular the use of plastic bags for single use, pesticides for individuals, etc … .
“Well is good, it’s going in the right direction since Copenhagen. For my part, I had started before Copenhagen. I went to COP 21/SIF 15, I have followed the work for a few days, I gave my opinion. But I think that consciences, mentalities are not yet sufficiently awake. We are in a capitalist system of consumption, people are still under the influence of an education, they depend on a work of a monetary system, they need money to pay their bills, eat, this the system which destroys the our earth system of overconsum. It does not work, it is scientifically proven, but unfortunately how we can get out of this cycle? That runs from the industrial era. How to change to an eco-sustainable system? How to close the factories that pollute? We must change technology, energy. It is already possible to replace oil with biofuels. We still talk too much about business in COP 21. Some of these people seem to forget that time is short. They see only the present, not the future nor reality of the past. The money and market is still the law and religion. We must completely change attitudes in education of humanity. But they did not mention this essential point. So, we do not advance as we remain in a perspective of business. Big part of the money does not go in favor of the environment but to the arms trade, to the dirty business. A human being should be able according to the laws of nature to live, eat healthily and do not depend on a market system. Nature will survive, but perhaps without men. The dinosaurs did not survive, the man can also disappear, our civilization is in danger, she is actually going to self destruction now. ”
Is it then your generation that will save the planet?
“Let’s start with the present generations to establish patterns to the attention of later generations who will be able to change everything.We really have to re-educate people!We should construct something stable for our children to follow the right path.
GBP actions is also registered logically, as part of global action.
It is now urgent to act against the finding of a very worrying trend, and perhaps irreversible in terms of bio-diversity, only the mass mobilization of global citizens may reverse it. ”
Do not you afraid that we take you for a utopian dreaming of a perfect world?
“The world today is destructive, if I do not dream of an ideal world where everyone lives healthily, who will? Just look at our leaders to realize they do not live healthily. I struggle to follow they recommendations of someone who has nothing to do with example in his life!
And be utopian, it’s nothing bad. It’s just a human being who dream of a better world. For a capitalist is a unreal being! The utopian knows that human being is capable of creating an Eden on earth and scientifically it is possible! One can explore space and find another biosphere. We can very well spend money of weapons for research. There you can move forward and survive as a civilization. ”

What does your role, as chair of Global Biodiversity Protection?
“Personally, I know where I’m going, I’m actually a motor that drives the other in its action, slowly but surly. We are already a few involved in this project in Congo, and we will probably lead to a larger member development, because the ideology that defends our association already exists of course,  I bring my energy, my ideas like that of a green job for them. The ambition of a green job is to place the employee in the healthiest way as much is possible. Many people are poorly seated at works, poorly lit, locked, they damage the eyes on an unsuitable computer, they eat badly in the canteen, they undergo staggered schedules etc … .This is really not an ideal of life ”
What brings you the fact of belonging to the 2011-2020 United Nations Decade, Biodiversity?
“It is a great privilege, an honor, to be in contact with as narrow this remarkable recognized organization. This is a huge commitment for us in our ambition to preserve as much biodiversity on our planet. The International Union for Conservation of Nature is a prestigious contact and we benefit from his experience, his advice.
IUCN has often invited us in Brussels and elsewhere, it’s a nice recognition. It proves that they appreciate my way, my style, my commitment, my seriousness. They know I do not work for my own image or for my personal interest, but for others. ”
Interview by Ph.TRAVERSIAN 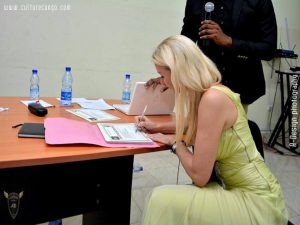 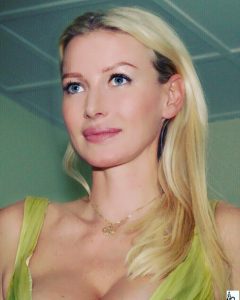 An innate seduction it sees as an asset in its militant handle committed to saving the planet EARTH!
“I think being pretty, it’s a plus. In the world of the environment, people are pretty cool. We are not in the capitalist world where women must be consumed. It is more pleasant to listen the talk of pretty woman. I think my background makes me sufficiently credible. I’m not a model who gives in to the bio mode! It’s also good to represent the health, fitness, I did swimming for coptetitios long enough, my pace proves that I respect myself and respect others. ”
Like all the young girls of her age dream of beauty , concourses , shows and trips. At 17, she was discovered by the famous Marilyn agency in Prague, she ” start ” in the capital of fashion and glamor, PARIS!
The City of Light seduced Iveta and she made her life here today.
“I’ve never been very addicted to this world glitter and luxury, because it is a very superficial environment. Show business leads many seductive demands but also a lot of jealousy. On the other hand, I used this craft for travel, to discover other languages, other cultures and very often I make interesting encounters. There are big advantages like going in usually inaccessible places, also known personalities unaffordable “.
Her fashion taste it occur to Iveta her paternal grandfather owned a hat factory? His wife was a landscaper ………….
If her supermodel status has allowed her to travel around the world, she had already discovered the world with her parents, living on a farm near Prague, her father, an engineer of Water and Forestry, was regularly sent on mission in to foreign countries, especially in satellite regions of the USSR. Iveta sister is today also talented landscape Ing. In Prague.
Fashion precisely. Iveta didnt wait for the ecology is in the air of time to start to be concerned. She had filed her statment of association before the Copenhagen summit who was a signal to the peoples and rulers.
Our pretty blonde displayed her superb physical before the lens of photographers, but behind the scenes, she perfected her knowledge, expands its Address Book and more learning, listening, discovering in contact with specialists, prominent politicians, intellectuals extr. Her brain was active as well as her glamorous smile.

Members from all backgrounds

She meets interesting people, often very committed to the environment, outstanding personalities in all areas and of course in the particular one that motivates the environment.
She solicited important makers oh higher order. And this is useful when oneself wants to invest in saving the planet.
“Politics are somehow in our DNA within the organization as we work with states, that we participate in major international events.
In 2007, under the influence of the internet, social networks, Iveta Seidlová starts broadcasting to her friends some information about the of biodiversity organization a subjects that was close to her heart.
The organization is set up with members from different backgrounds, engineers, lawyers, students, motivated people to change things.
“Everything is set up after a trip to Africa,” says Iveta, “I understood that it was really bad there and that it was urgent to do something.”
She focuses on tropical regions, now the Congo DRC, where many species are vulnerable, particularly because of deforestation, poaching etc …. She plans eventually to develop new projects in Africa such as Gabon, Cameroon, Congo Brazzaville, etc … ..
She filed the articles of association in  September 2009 and made contact with the IUCN, the great organization of environment of the United Nations that depends, a starting project of reforestation  is start to be developed in Kenya, an invitation to the European Parliament following … .But the arrival of her child puts a halt to the ” machine ”.
Five years later, she comes back more determined, stronger and more ambitious than ever.
“This fight requires a lot of energy, work, effort,” says Iveta, “my priority was my son, I could not raise two children together! Being mommak me more sensitive to humanity. Before I did not want deal with preservation of humans because is humans who make all those actual crimes ,just save the animals,and worry about the vegetation of the planet. With my son, I became more sensitive to men’s kind and understand his weak actual position of survive. ” 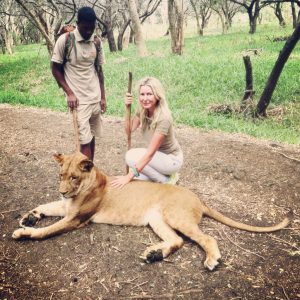 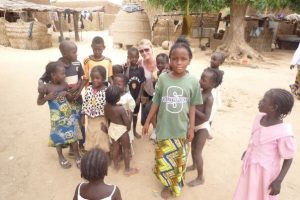 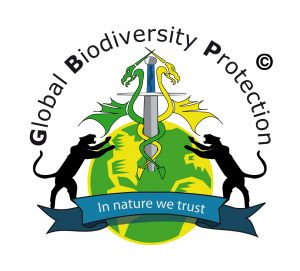 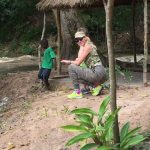 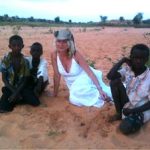 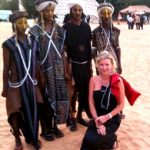 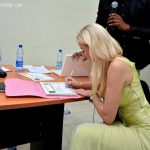 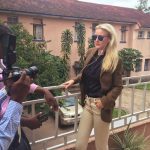 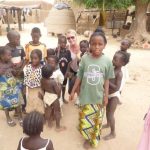 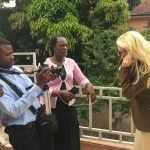 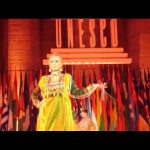 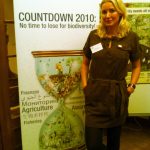